Home/News/Early Birds and Boys in Blue: A century of Radnorshire aviation
Previous Next 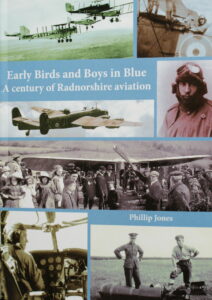 In April 1912 Denys Corbett Wilson made an emergency landing near Colva en route to becoming the first to fly across the Irish Sea. That heroic flight heralded a flurry of aerial activity across Radnorshire and the following year air displays were becoming an accepted part of the summer’s entertainment. In 1914 a French balloon unexpectedly came to earth near New Radnor. With the start of the First World War the displays came to an end, but one of their effects may have been to encourage young Radnorshire men to join the Royal Flying Corps, the precursor of the RAF, for several did. Their stories tell of the dangers of flying in those days and of facing German planes and anti-aircraft fire. After the war one of the pilots, who had always had an interest in natural history, had a fish tank made to fit over his aircraft’s engine so that he could import tropical fish on his return flights from Germany.

Between the wars, efforts were made to create an airport at Llandrindod Wells, and for two years an air taxi service operated from the town. During the 1930s air displays were common at shows at Builth, Knighton and especially Llandrindod, with visits from the likes of Sir Alan Cobham’s Flying Circus and his plane the Youth of Britain, which took youngsters on free flights, all to encourage an interest in aviation.

With the coming of the Second World War, these displays once again were brought to a halt, but perhaps because of them, as before, many young Radnorshire men joined the RAF, some having previously been members of the Air Cadets of which there were several groups across the county. Several Radnorshire men undertook at least part of their RAF training in the USA and Canada, and were to serve from bases in the UK, North Africa, Italy (as the allies pushed north in 1943) and the Far East. Reading their stories is like learning about the Second World War from a peculiarly Radnorshire perspective. Chapters also cover the bombing of Radnorshire and those aircraft that came down in the county, usually on training flights but including one German plane brought down by a combination of anti-aircraft fire and the actions of a night fighter. Finally there are stories of those who joined the RAF in the 1950s and of the aircraft that have crashed as Radnorshire became part of the RAF’s area for low flying training.

Phillip Jones’s father is one of those mentioned in the book. Phillip’s passion led him and his wife Amanda to spend 25 years researching all they could about those from Radnorshire or who came to live in Radnorshire that had connections with the RAF and also the Royal Naval Air Service. This book is the result of that time spent talking to those still alive and family members of those who aren’t, and many hours beavering away in the archives.