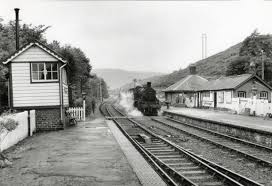 The second meeting of the year was held on May 20th 2016 at the Old School, Cwmdeuddwr, near Rhayader. The speaker was the Society’s Hon. Sec., Dr. Colin Hughes, and he took the sizeable audience of members and friends on a visual and fact-finding journey of this now defunct railway line from north to south; with illustrations of the different stations and halts, signal boxes, railway crossing gates, various types of bridges, and the Marteg and Rhayader tunnels. He also showed photos of engines belching smoke and steam as old as from 1898, and he described them as living, breathing, beings.

The Mid Wales line, started in 1864 by Cambrian Railways, ran from Llanidloes, via Llangurig, Rhayader, Newbridge, and Builth to Three Cocks; a total length of 50 miles. The line, once described as ‘outstanding, charming, and picturesque’ was later run independently, and eventually closed on 31st December 1962.

Rhayader station was actually in Llansantffraed Cwmdeuddwr and the railway junction, with a connecting point for the Elan Valley railway, was just north of the Rhayader tunnel (now home for bats). Pictures were also shown of the Station and signal box at Doldowlod. The longest viaduct on the line is where the Ithon joins the Wye.

At Newbridge the station was behind the present Golden Lion pub, with one or two tracks and a cattle dock siding. Dr Hughes showed a photo of the Stevenson Locomotive Society’s special train at Newbridge on the last day of the line in 1962. The old signal box from Newbridge is now situated at the old Erwood Station (now Erwood Centre and Art Gallery).

At Builth Road there were low and high levels (see 1984 Radnorshire Transactions), and somewhat surprisingly a luggage tower or lift to take suitcases to the other level. Builth Station near the present Royal Welsh Showground was a particularly busy triangle of buildings and activity and a large staff was employed. At the Three Cocks Junction there were grand buildings – four platforms and a signal box – it being a busy place as the junction of the Mid Wales, the Neath and Brecon, and the Merthyr and Brecon lines.