( Image above is of St Anno Llananno screen)

On the 21st of April, Angus Kaye gave a talk to The Society about his on-going Radnorshire Churches and historic Chapels study. Angus is a retired architect, who worked at Powys CC between 1974 and 1988 and is now involved in the preservation of buildings of architectural and historic interest.

Angus summarises his talk as follows:

This quote of John Betjeman in First and Last Loves is a good starting point. “The Royal Institute of British Architects was founded in 1837. Henceforth the interest in architecture shifts from regional style and builders to individuals.”

Whilst appreciating the value of research into individual architects and the classification of building styles and details is informative, I think that a greater focus should be placed on understanding how these buildings came to be the way they are today.

Radnorshire Churches and Chapels are often over-looked by architectural historians from ‘away’, probably because so many had to be heavily restored in Victorian times by architects, who are not too well known. However, behind the skin of restoration lie clues to previous arrangements dating back in many cases over 1400 years. Also several remarkable churches and chapels in Radnorshire are ‘time-capsules’ of different periods and illustrate various stages in the development of church architecture and liturgy.

So far I have visited around 60 Radnorshire churches, plus sites and historic chapels, gaining access to the great majority. However only about half appear to serve towns or ‘nucleated’ villages. The remainder provide a focus for ‘dispersed’ communities.

You could ask if these latter sites ever served larger populations or did they originate as remote cells for the ascetic monks of the Celtic/ Early Christian Church? There are clear similarities to early sites in West Cornwall, Northern England and Scotland, all at a time when South and East England had largely returned to paganism, following Anglo-Saxon invasions.

Clearly the shape and form of the churches was influenced by the County’s climate, geology, topography, ecology and economy. Timber for building was readily available in Radnorshire, whilst good quality stone is restricted to limited areas of Radnorshire, before the advent of cheap transportation. The marginal uplands and wet climate also determines the type of dispersed farming economy that in turn dictates the scale and style of these places of worship. However the rich valley supported the past splendour of the monastic buildings at Abbey Cwm Hir.

Although there are remote areas within Radnorshire, the County was in an unfortunate strategic position in medieval times, being on key north-south and east-west routes. Certainly churches were not excluded from the wider destruction that took place in the various conflicts between Welsh princes and the Marcher Lords. It is significant the second part of C15 sees a major rebuilding of churches in the eastern part of the County. In particular, there appears to be mass destruction well into Herefordshire in the wake of Owain Glyndwr’s campaign in 1401. 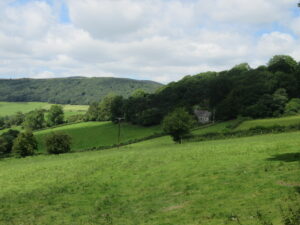 Returning to an earlier point, the earliest churches in Wales (from 600AD?, probably followed the ascetic, eastern tradition of seclusion and contemplation. The circular enclosures of these holy men attracted followers, became burial places and could later develop into a focus for Christian worship. (see: Rhulen, Llanddewi Fach or Llangelynnin further afield). They are marked often marked by ancient yew trees and a holy well.

Some of these sites were probably of pagan origin, (see:Llanfihangel Nant Melan); however the perceived common practice of converting pagan sites to Christian ones, in accordance with Pope Gregory’s Edict, is not evident in the majority of the old Radnorshire sites. 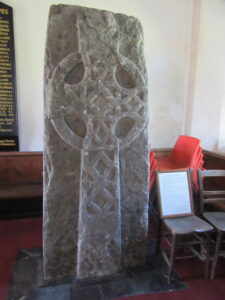 It is worth noting that The Celtic church was an-iconic in its imagery, following the belief that is still current in some religions today, that Man cannot create images of God’s living creations. A feature of such art can be seen at Llowes and Bryngwyn. A visit to The Margam Stones Museum is highly recommended. See also Penmon Abbey in Anglesey. If you are in West Cornwall visit Truro Museum and the old Penwith churches to see the similarities and differences in interpretation.

The Augustinian (mainstream RC) Church and the Celtic Church slowly merged in the latter part of the Anglo-Saxon period and the Augustinian church became dominant. Even in Scotland, the Irish monks were expelled by C12. The clergy celebrated the sacraments within the separate area of the chancel in Latin and the congregation observed from within the defined nave. Bibles were exceedingly precious and written in Latin. (For example, The Winchester Bible is in three volumes and took four years to copy. It took two men to carry each volume.)
Rood screens (Rode- Old English for Rod or Crucifix) divided the clergy from the laity. Many Radnorshire churches are single cell, so forming the division using the Rood Screen, results in a particularly dominant feature. However the main emphasis on top of the Screen was the Calvary Cross within the Rood loft. These were systematically removed and destroyed at the Reformation Access to these lofts was often made from small staircases within the walls. (see: Llanwnnog and St Levan Penwith) and various ceremonies be presented from within the loft down into the congregation. The entire screen and rood figures would also be completely covered at various church calendar events.

These screens were highly carved and brightly coloured (polychromy). Radnorshire is fortunate to have miraculously surviving examples, which equal anything elsewhere in The Welsh Marches. (see. Llananno-Welsh style and Old Radnor -English style). Because access to the written word was limited, the walls were richly painted with scenes from the bible, with often icons of various saints, all to communicate the Christian message and stories.

Because we are all familiar with The Reformation, it is easy to over-look how cataclysmic this process was. Starting with the printed English Bible in 1526, (first Welsh Bible 1567) we see the start of the Laity having a new relationship with God. Wales was drawn in by the Act of Union of 1536 to the whole process of Henry VIII’s break with Rome. However the radical destruction of icons and other symbols of Catholicism didn’t really occur until the reign of Edward VI and later up to and including The Civil War.

It is probably not for us to judge the Puritan fanaticism that resulted in such destruction. Elizabeth and James VI set out to curb the worst ravages. However the physical manifestation of this movement was the destruction of altars, defacing of icons, removal stained glass (where they could afford to replace it with clear glass) and white-washing of walls to hide wall paintings. You could say there was a reversion to the an-iconic. Also each man or woman had their own relationship with God and a totally different relationship between the communion table and the congregation. (see: Llandeilo Graban; Hailes Church)

I have yet to understand the long period of neglect in Church building and maintenance after the Restoration, up to the early Victorian period. (1660 – 1830) Obviously there are exceptions as in London after the Great Fire and rococo Shobdon over the Border. Clearly a large proportion of the congregation moved to non-conformist chapels. It was also a period of close ties between the priest and the squire, with many forms of patronage. Whilst suffering from neglect, the churches changed radically internally with subscription box pews and the pulpit and readers desk becoming the centre point of focus. The Ten Commandments, Lord’s Prayer and Royal Coat of Arms were now a displayed on the whitewashed walls. Preaching and reading from the Bible become the central activity. 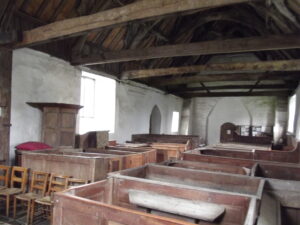 Radnorshire is fortunate to have such a spectacular survivor of this arrangement at Disserth.It is surprising that this church is so little known outside the County and that it doesn’t appear in many of ‘The Best 100 guides’.

Restoration of churches in Victorian times started much earlier in England and it is illuminating to read Kilvert’s descriptions of the poor state of Radnorshire’s churches in the mid Victorian period. Also the ruinous state of many churches was photographed. (see: Llanbadarn Fynydd, Beguildy and Bryngwyn.) 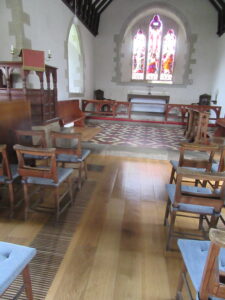 The Tracterian movement of the 1830s introduced a return to the highly embellished, pre-reformation style of church interiors. These Anglo-Catholic interiors showed a return to Iconic forms of art work and church craftsmen and furnishers prospered in the Victorian period. As mentioned above, this movement coincided with many churches having fallen into disrepair and also the need to build new churches to support the move of the population from the country into towns and cities. For those prepared to travel, Pugin’s St Giles Cheadle is probably the most complete embodiment of these principles. In Radnorshire the interior of Evancoyd is remarkable. In Radnorshire this rebuilding and restoration programme was supported by considerable donations from the congregations and in several cases entire churches were rebuilt at the expense of local landowners.

We have now entered John Betjeman’s Age of the Architect and that will be the subject of further study.

Of course, we are now in a further age of change with the interiors of our churches with re-ordering of the space as seen at Discoed and Bleddfa.