The Radnorshire Society held their first lecture of the year on Friday April 13 at Doldowlod House, when the speaker was Julian Gibson-Watt, his lecture was entitled “James Watt, father and son, and the creation of the Doldowlod and Kinnerton Estates.” The President of the Society Robin Gibson-Watt, welcomed a large number of members and friends to the family home, and then introduced his elder brother, the speaker for the evening.

Julian began his talk by saying that James Watt,Senior was a friend of Eramus Darwin, father of the famous Charles. After being born in 1736 and educated in Glasgow, he went to Birmingham and teamed up with the manufacturer Matthew Boulton, with James being the inventor. He spoke of the latter’s involvement with steam engines, and the improvements he made turning purely mine pumps into the engines which were an integral part of the start of the Industrial Revolution. Julian explained that whilst studying the family papers he came across the fact that James Watt, used counter proof copying. This was an elementary form of copying invented by James Watt. Although its development was a trial and error process, with unreliable materials, the perfected invention was remarkable for its time. Julian thought that this primitive method which was of great value in copying outgoing letters, a fascinating process and that should be viewed on a par with his engineering inventions. James, a knowledgeable man and an expert in many fields, who had a compulsive itch to make things work, patented this invention. He also built, without previous experience, a musical organ and his further success as an engineer was seen by his deigning a method for taking water across the River Clyde. James Watt, Senior and partner Matthew Boulton retired in 1800, and their sons took over. James Watt Junior, born in 1769, somewhat ill advisably got involved in the French Revolution when only 23 years of age, and never married. He was good at developing ideas, and therefore a successful businessman. The younger artistic James was involved with steam engines especially in ships, and also followed his father’s original, rather large, copying machines, by developing a portable, a writing desk version. 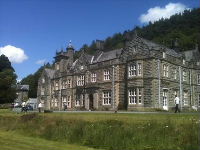 James Watt, unlike most of his contemporaries, made a lot of money from his inventions, and when investment in companies became less attractive, he invested in land. Firstly, he bought land near Gladestry, from the Harley family, later buying four or five more farms. This estate was retained in the family until just before and after World War I, before being sold. The next estate was Doldowlod. Eventually, after rather complicated negotiations, a purchase from local landowner Henry Price by agent James Crummer was achieved in 1803. James Watt had fellen in love with Doldowlod, the buildings and land, but he knew the road to get there was awful! The two James Watts built up the estate which became extensiveJames Watt, father and Son. As well as inheriting some small tenant farms, they also bought several farms, and were involved with valuable oak trees, hay and sheep. James Watt,Senior who died in 1819, never lived at Doldowlod, rather it was James Junior, who lived at Aston Hall, who loved the estate and stayed for weeks at a time. It was this younger James, when aged 75, who built the southern part of the house, ultimately achieving a beautiful house based on his original Birmingham home of Aston Hall. During his talk Julian commented on the uncertainty of crossing the river which divides the estate. He also referred to the Rebecca Riots: Turnpike Roads, Toll Gates and the Bible-based petition from “Rebecca and her daughters”.