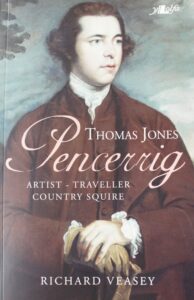 The first, full-length biography of the eighteenth century landscape artist Thomas Jones (1742-1803) has just been published.  It draws together his varied life as a painter, first in London then in Italy where he spent over six years, then as a country squire at Pencerrig in Radnorshire.

At Pencerrig he supervised the farmwork and was involved in several landscaping projects.  He continued to paint.  In his later years he wrote his lively memoirs based largely on his experiences in London, Rome and Naples.

The author lived for in a corner of the Pencerrig estate for over 20 years and was a member of the Radnorshire Society.