The Mortimers and Radnorshire

The Mortimers and Radnorshire 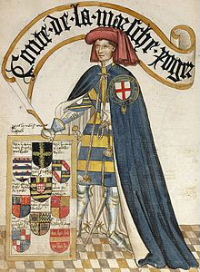 Philip Hume, Secretary of the Mortimer History Society, started by giving a general overview of the genealogy of powerful Mortimer family and the way in which their power derived from some changing political and family relationships, In particular, the family married into the royal family and actually ruled the country for a short period.  Both Edward IV and Richard III were Mortimer grandsons. Interestingly R.Tovey once said “  For the Mortimers to have survived for over three centuries as Marcher Lords was a political and biological feat”.  Confusing the genealogy was the recurrence of names; by way of example Philip explained that there were at least four “Roger” Mortimers, starting from 1078, the first one coming from Mortemer Castle, Normandy. The core of their holdings was in the Wigmore area.  The Castle at Pilleth, amongst others, was built by the Mortimers, who, with their conquest rewards and strategic marriages built up their domination of Radnorshire.  The speaker outlined the lives of the successive Mortimers over the centuries, and how with their loyal service to kings, and by marrying into the royal family, they got close to the crown.

He went on to elaborate on “The Mortimers and Radnorshire” stating that the county did not exist as a political entity at the time of the Mortimers, it being known simply as “the lands between the Wye and Severn”. The arrival of the Normans resulted in the area becoming strategically important with Presteigne being described as “the gateway to Wales”. During the lecture Philip told some well-known stories and then immediately showed that most probably weren’t true. He continued his description of the Mortimers activities and those of their followers, and the rivalry with other powerful families such as the Cadwallons and their siblings. Throughout many generations the Mortimers continued to reinforce and extend their control of the local district.  There were setbacks, for example, they lost areas to the Welsh Princes in 1241. However. Roger Mortimer built a new castle at the southern end of the Cefnllys ridge in 1277 and went on to complete the conquest of Maelienydd.  The 184-year period between 1093 and 1277 included 80 years of Mortimer control, though in later years Maelienydd had lost its strategic significance.  The Mortimers were entitled Earls of the Marches, becoming one of the most powerful of the great families that effectively ruled the Welsh border. The power of the Mortimers was able to grow in importance as, although formally tenants of the king, they held considerable autonomous authority in their role in “defending” the border.  From their seat at Wigmore they took over smaller boroughs, built castles, formed armies, accumulated war booty, and were involved in the justice system.