Home/Event Reports/Military Flyers of Radnorshire
Next 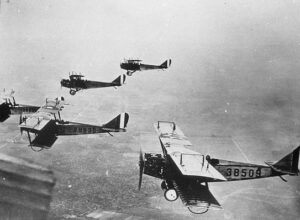 The first lecture of the year took place on Thursday 14 April 2016 at Llanddewi Village Hall. The speaker, Mr. Phillip Jones, focussed his talk on the period 1915 to 1950, when sixty-five prospective flyers left the small county of Radnorshire to fly in the Royal Flying Corps ( later the Royal Air Force) for the experiences and excitement of early flying.

Mr Jones detailed some of the brothers, sons, and uncles of various Radnorshire families who went off to fly – either as bomber pilots, to instruct, or save lives; it being almost unbelievable that such a large number took part from a county as small as Radnorshire. He showed images of several Radnorshire airmen and not surprisingly gave the almost inevitable fact that most of these flyers died in some way, usually in battles, accidents, or lost over the sea. He also showed on a map the locations of where thirty-three planes crashed in Radnorshire between1943 and 1987.

During questions from the audience it was revealed that it was frequently a family tradition for sons, brothers, and uncles, to follow each other into the air. Mention was also made about the flying circus, the 579 Squadron ATC, and the German crash near Hundred House, near Llandrindod Wells.

Mr Jones has had a long time passion for aircraft, and at least some of this twenty-five year long project is featured in the Radnorshire Museum in Llandrindod Wells. In the near future a book is to be published on the subject.