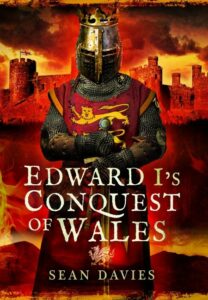 Edward I’s conquest of Wales was a key formative event in the history of Britain, but it has not been the subject of a scholarly book for over 100 years. Research has advanced since then, changing our perception of the medieval military mind and shining fresh light on the key characters involved in the conquest. That is why Sean Davies’s absorbing new study is so timely and important. He takes a balanced approach, giving both the Welsh and English perspectives on the war and on the brutal, mistrustful and ruthless personal motives that drove events.

His account is set in the context of Welsh warfare and society from the end of Rome to the time of Edward’s opening campaign in the late thirteenth century. The narrative describes in vivid detail the military history of the conflict, the sequence of campaigns, Welsh resistance, Edward’s castle building and English colonization and the cost of the struggle to the Welsh and the English – and the uneasy peace that followed.

Dr Sean Davies has studied medieval warfare and the history of Wales for over twenty years, his research earning him a degree, Masters and PhD from the University of Wales. He has published extensively on the subjects, his books including War and Society in Medieval Wales and The Last King of Wales. Sean was born and bred in the valleys of south Wales and lived in Swansea and the borderlands of mid Wales before settling in Cardiff. He was a BBC journalist for over twelve years and now works as a writer and editor.